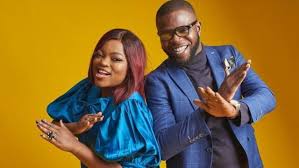 * Naira Marley On the Run Actress,

The Lagos state government has dragged Star Actress Funke Akindele popularly known as Jennifer to court for grossly violating a social distancing order put in place to curb the spread of the rampaging Corona Virus.

Akindele and her husband, Abdulrasheed Bello (aka JJC skills) were arrested on Sunday, April 5, 2020 for organizing a House Party to celebrate Skills birthday which fell at the period of the nationwide lockdown.

The two were dragged before a magistrate court in Ogba area of Lagos, where their charges were read to them and the two pleaded guilty.

The party which has come under serious criticism on the social media was organized by the celebrity couple despite, Akindele’s appearance in a Dettol Nigeria sensitization campaign against Corona Virus, where she preached the importance of hygiene and social distancing in a Corona Virus campaign sponsored by producers of the antiseptic product.

The party had in attendance, stars like Naira Marley and a list of others, meanwhile information reaching Global Upfront Newspapers (GUN) reveals that the police are on the lookout for Marley.

Prior to Monday’s arraignment at the magistrate court, Akindele’s behavior had come under heavy hammer by Nigerians who have followed her on the various social media platforms for acting irresponsibly for defying the social distancing order taken as precaution to curb the spread of the rampaging scourge.

In a statement posted on Twitter, Dettol Nigeria stated that it “does not condone any breach of the guidelines on COVID-19.” The company also noted that Funke Akindele is not a brand ambassador for NCDC.

A remorseful Akindele had before her arraignment apologized to Nigerians for the way she and her hubby acted.