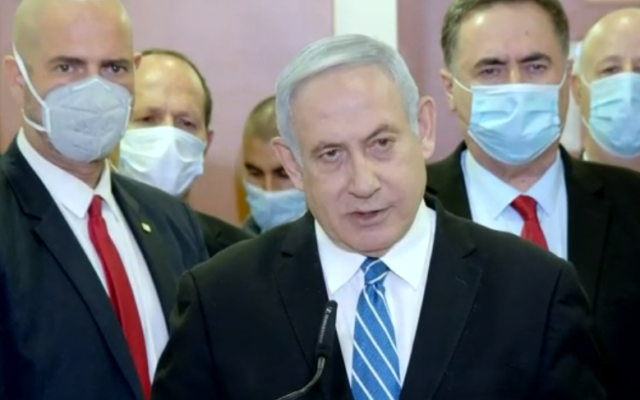 The Times of Israel (TOI)

Prime Minister Benjamin Netanyahu on Sunday appeared in court for the start of his corruption trial, and ripped into police and prosecutors as he became the first Israeli premier to stand trial on criminal charges while in office.

Flanked by ministers and lawmakers from his Likud party, Netanyahu delivered televised remarks before the start of the hearing at the Jerusalem District Court, declaring that all his right-wing supporters were on trial along with him.

“Elements in the police and State Attorney’s Office banded together with left-wing journalists… to fabricate baseless cases against me,” he charged. “The goal is to oust a strong right-wing prime minister and to banish the right-wing camp from leadership of the country for many years.”

“I’m not a poodle… and therefore they need to remove me by any means,” he said.

Netanyahu blasted the police who led the probes into him, saying officers made up claims that he had sent private sleuths to track investigators and that he had prompted a female officer to complain of sexual harassment against the head of the anti-corruption unit.

“These investigations were corrupted and fabricated from the start,” he said.

The premier claimed “the band of anyone-but-Bibi” sought to interfere in two of the three elections over the past year in a bid to hurt Likud at the polls. He pointed to the police recommendation that he be charged ahead of the April 2019 elections and Attorney General Avichai Mandelblit’s decision to indict him before the latest elections in March.

“They did everything so I wouldn’t stand here today as prime minister,” he said.

“I stand here today as your prime minister with my back straight and my head held high,” he said.

He again urged for the proceedings against him to be broadcast live — a request already rejected by Jerusalem District Court judges — and called for the recordings of Mandelblit from the so-called Harpaz affair, which the attorney general was never charged in, to be released.

Netanyahu also claimed witnesses were intimidated into testifying against him.

“This is the rule of law? This is democracy?” he said, asserting there was no precedent for charging a politician for allegedly trading favors for positive news coverage.

“They invented a special clause for me that doesn’t exist in any law book in Israel or the world. How absurd,” Netanyahu said.

He suggested Mandelblit had “something personal to hide” and said that if the public would “know the whole truth,” the cases against him would fall apart.

“The people recognize…: This is an attempted political coup against the will of the people,” he said.

Netanyahu vowed to press on and fight the charges, saying he would continue to lead Israel.

Following the televised remarks, Netanyahu and the Likud lawmakers posed for a photo in the courtroom, many of them wearing masks in accordance with Health Ministry guidelines to prevent spreading the coronavirus.

Prime Minister Netanyahu had walked into courtroom 317 for the opening of of his corruption trial at the Jerusalem District Court.

He was seen conversing with his lawyers as several photographers snap his photo from behind.

Judges Rebecca Friedman-Feldman, Moshe Bar-Am and Oded Shaham enter the courtroom as the attendants take their seats to start the trial. Netanyahu refuses to take his seat on the defendant’s bench until the press has been ushered out of the room.

The judges open the trial. Netanyahu, Shaul and Iris Elovitch and Arnon Mozes have stood to confirm that they understand the charges against them.

At court, Premier Nyetanyahu railed against police, prosecutors, again claims charges against him are attempt to bring down right-wing rule; hundreds demonstrate for and against him

The opening hearing of Prime Minister Benjamin Netanyahu’s corruption trial, concluded, deputy state attorney Liat Ben Ari says she does not have an issue with the defendants not being present at the next session on preliminary requests.

Judge Rivka Friedman-Feldman says the court will notify the sides regarding the date of the next hearing.

Deputy state attorney Liat Ben-Ari dismisses the defense’s request for three to four months to go over the evidence before moving forward with the trial.

“If we had started today I would say we need 3-4 months [to study the materials], but this case was not born today. On February 28, 2019, the attorney general decided to file an indictment subject to the hearing. Since then, a year and four months have passed,” Ben Ari says.

As the trial unfolded inside the court, music blares from the pro-Netanyahu rally taking place right outside the courthouse, with hundreds sticking it out for the entire hearing, despite not knowing what’s going on inside.

As the various attorneys address the court, Netanyahu sits on the defendant’s bench.

His facial expression is not visible as in addition to the blue medical mask he’s wearing, the only camera in the courtroom is located in the back behind the Prime Minister.

Iris Elovitch’s attorney Michal Rosen-Ozer says the prosecution was given more time with the evidence against her client than she was, adding that she needs more time to prepare before moving forward with the trial.

Shaul Elovitch’s attorney Zach Hen argues that recent interviews given by the prosecution’s major witnesses to the media are unacceptable and asks the judges to outlaw such interviews going forward.

“Like every citizen, the prime minister also has the presumption of innocence and I am certain the legal system will carry out a just trial,” he writes on Twitter.

“I would like to emphasize that my colleagues and I have full faith in the legal system and law enforcement. At this time, more than ever, as a state and a society, we must seek unity and reconciliation, for the sake of the State of Israel and its people.”

Netanyahu’s attorney Micha Fetman tells the judges that he needs additional time — roughly two or three months — to go over the scope of the case, as the exact makeup of the defense team in the various cases has yet to be finalized.

Opposition leader Yair Lapid says that “Netanyahu’s wild and inciting aggression against his trial is final proof of why a criminal defendant cannot continue to serve as prime minister.” 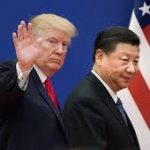 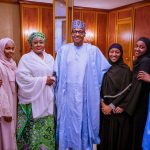