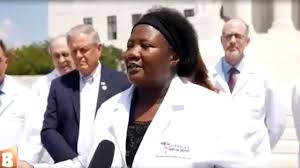 A video of a Nigerian-trained doctor in the United States touting the effects of hydroxychloroquine to treat the coronavirus went viral.

In the video, she says she used the drug to treat more than 350 patients in Houston, Texas.

The video was retweeted by President Donald Trump and his son, Donald Trump Jr. Social media giants Twitter and Facebook had the video taken down for the unfounded claims and it ticked the doctor off as she threatened Facebook by telling them to “put back my profile page and videos up or your computers with start crashing till you do,” according to the New York Daily News.

The Houston doctor, Dr. Stella Immanuel, in the video that is circulating throughout the internet, gives testimony that the public is being misled about the malaria drug, hydroxychloroquine.

This is the same controversial drug that Trump has been trying to tout as a miracle drug that can cure the coronavirus. Immanuel also says in the video, “Hello, you don’t need a mask. There is a cure.”

Stella Immanuel MD@stella_immanuel “Hello Facebook put back my profile page and videos up or your computers with start crashing till you do. You are not bigger that God. I promise you. If my page is not back up face book will be down in Jesus name.”

On Tuesday, The Daily Beast led with this headline regarding the doctor, stating “Trump’s New Favorite COVID Doctor Believes in Alien DNA, Demon Sperm, and Hydroxychloroquine.” This led to her acknowledging the daily online news site.

And earlier today, she chastises Dr. Fauci, accusing him of lying to the American public.

Stella Immanuel MD@stella_immanuel “WE NEED YOUR HELP. We are being attacked, ridiculed and discredited. We need our patients to SPEAK UP. If you have been cured by this drug, share your story online using this hashtag.”