Speaking to reporters, the president notes ‘very serious’ rumors — which are false — that the VP candidate is not eligible to serve in the role

WASHINGTON (AP) — US President Donald Trump on Thursday gave credence to a false and racist conspiracy theory about Kamala Harris’s eligibility to be vice president, fueling an online misinformation campaign that parallels the one he used to power his rise into politics.

Asked about the matter at the White House, Trump told reporters he had “heard” rumors that Harris, a Black woman and US-born citizen whose parents were immigrants, does not meet the requirement to serve in the White House. The president said he considered the rumors “very serious.”

The conspiracy theory is false. Harris, who was tapped this week by Joe Biden to serve as his running mate on the Democratic ticket, was born in Oakland, California, and is eligible for both the vice presidency and presidency under the constitutional requirements. The question is not even considered complex, according to constitution lawyers. 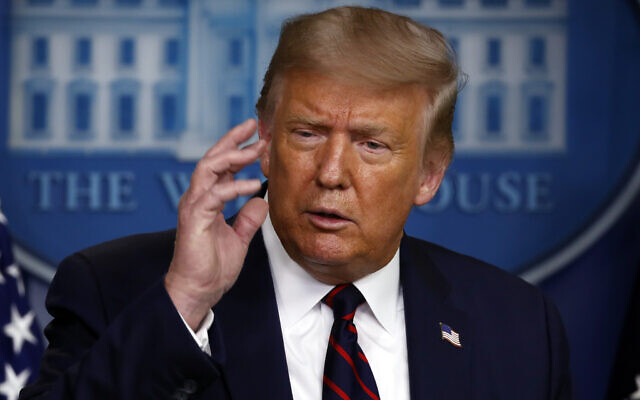 US President Donald Trump speaks during a briefing with reporters in the James Brady Press Briefing Room of the White House, August 4, 2020, in Washington.(AP Photo/Alex Brandon)

Trump built his political career on questioning a political opponent’s legitimacy. He was a high-profile force behind the so-called “birther movement” — the lie that questioned whether President Barack Obama, the nation’s first Black president, was eligible to serve. Only after mounting pressure during his 2016 campaign did Trump disavow the claims.

Trump’s comments landed in a blizzard of other untrue, racist or sexist claims unleashed across social media and conservative websites after Biden picked Harris, the first Black woman and the first Asian American woman on a major party ticket. The misinformation campaign is built on falsehoods that have been circulating less noticeably for months, propelled by Trump supporters, and now the president himself.

“I have no idea if that’s right,” said Trump, who said he had read a column on the subject earlier Thursday. “I would have thought, I would have assumed, that the Democrats would have checked that out before she gets chosen to run for vice president.”

Trump made the comments in answer to a reporter’s question and appeared to be referencing an op-ed written by John Eastman, a conservative attorney who argues that the US Constitution doesn’t grant birthright citizenship. Eastman sowed doubt about Harris’s eligibility based on her parents’ immigration status. Harris’s mother was born in India and her father was born in Jamaica.

But constitutional law experts say Harris’s parents are beside the point. The 14th Amendment grants citizenship to all people born in the US and Article II Section 1 of the Constitution says that to be eligible for the vice presidency and presidency a candidate must be natural-born US citizen, at least 35, and a resident of the United States for a minimum of 14 years. 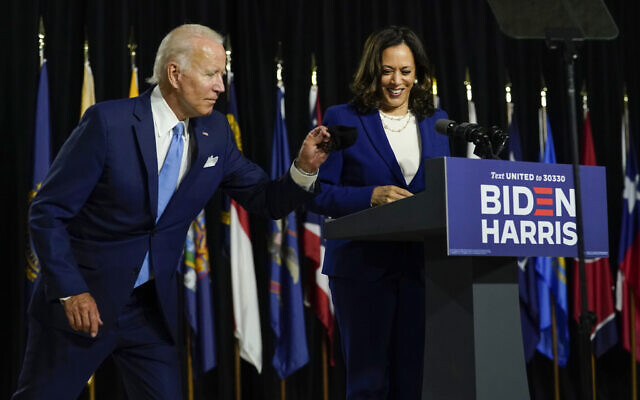 “No, there’s no question about it,” said Christopher Kelley, a political science professor at Miami University in Ohio. “It’s been recognized since the people drafted it back in the 39th Congress that (the 14th) amendment would cover people not just born to American citizens but born on American soil.”

The president’s reelection campaign’s senior lawyer, Jenna Ellis, shared the controversial Eastman column on Thursday morning, hours before Trump was asked about it at a White House news conference. Trump noted that the column was written by a “very highly qualified and very talented lawyer.”

Eastman, the former dean of Chapman University’s Fowler School of Law, where he is a professor, is also a senior fellow at the conservative Claremont Institute. According to his bio on the institute’s website, he also served as a law clerk to Supreme Court Justice Clarence Thomas. 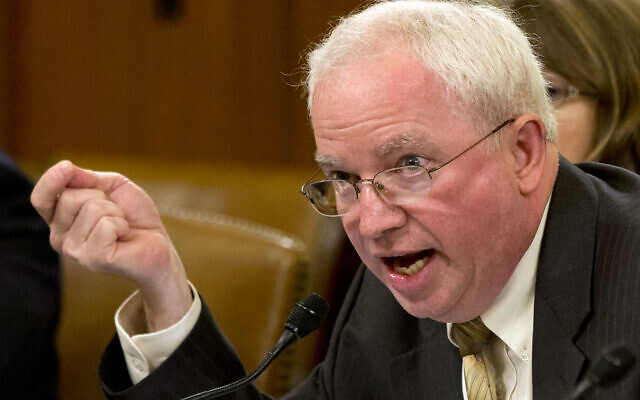 He also ran in the Republican primary to serve as California’s attorney general in 2010. Eastman was defeated by a candidate who went on to lose to Harris.

Newsweek, which published the controversial Eastman op-ed questioning Harris’s birthright qualification, defended the piece, arguing that Eastman “was focusing on a long-standing, somewhat arcane legal debate” about the 14th Amendment and not trying to “ignite a racist conspiracy theory around Kamala Harris’s candidacy.”

Online rumor and conjecture that Harris is ineligible to serve first surfaced when she announced her campaign for the White House in 2019. A viral post with the misleading information was revived again, days before she was announced as Biden’s running mate, as pro-Trump Facebook users spread the message in groups and on their pages.

Harris has been a top target of misinformation since launching her own bid for the White House last year. Women’s groups, which have banded together to call out sexism, racism and misinformation about Harris and other female candidates, pointed to other examples of conservative figures focusing on her race and gender in recent days.

Fox News host Tucker Carlson mispronounced Harris’s first name multiple times during a segment Tuesday night, and grew agitated when a guest corrected him, telling Carlson it was a matter of respect. Carlson responded, “So what?” and then mispronounced her name again, twice.

“That is certainly a slight,” said Amanda Harrington, vice president of Time’s Up, which works to stop workplace harassment. It’s a type of disrespect often shown to people of color in the workplace, she said, adding that on the national stage “it asserts a false narrative about who belongs in leadership today.”

Minutes after Biden announced his pick, conservative commentator Candace Owens posted a false attack on her Facebook page, claiming Harris had only started identifying as Black in the run-up to the presidential election. Until then Harris had solely described herself as Indian-American, Owens wrote, inaccurately.

Harris has been accused of reaching her position in politics due to sexual relationships, a sexist claim pushed on social media and elsewhere — including an article in The American Spectator, a conservative online magazine, that referred to her as “the mattress.” On Wednesday, Eric Trump, the president’s son, liked a tweet that referred to her as “whorendous.”

“These are not the kinds of things Mike Pence experienced, or Tim Kaine for that matter,” Harrington said, referring to the vice president and the 2016 Democratic vice presidential nominee.

But Trump has questioned other rivals’ eligibility to serve in the White House. In 2016, the Republican nomination fight raised questions about whether rival Sen. Ted Cruz met “natural-born” citizen requirements. Cruz was born in Canada, but his mother was born in the United States.

Similarly, in 2008, questions arose about whether Sen. John McCain qualified as a “natural-born citizen” because he was born in the Panama Canal Zone, where his father was stationed. Questions about McCain’s qualification spurred bipartisan outrage and the Senate passed a nonbinding resolution declaring McCain, who become the GOP presidential nominee, a natural-born citizen. Obama, who beat McCain in the 2008 race for the White House, was even a co-sponsor of the McCain resolution.