A nasal spray that will be marketed as capable of killing 99.9 percent of virus particles has started rolling off production lines in an Israeli factory.

The spray could have prevented much of the world’s COVID-19 infection, its inventor, Dr. Gilly Regev, told The Times of Israel.

“We are hoping that our nasal spray will now save many lives of people in countries that are waiting for the vaccine,” said Regev, an Israeli-raised biochemist who co-founded the company SaNOtize and developed the spray in Canada. “This will be affordable and can be used for prevention, to protect from any respiratory viral infection.”

She said that it has been shown to be effective in the lab against a wide range of viruses, and said that new variants of the coronavirus won’t interfere with its effectiveness, emphasizing: “It contains a broad spectrum antiviral which kills all viruses and all variants.”

Regev called Enovid a “hand sanitizer equivalent for the nose,” and said that it creates a physical barrier in the nasal passages to stop viruses along with a “chemical barrier” of nitric oxide, which is known for its antimicrobial qualities. “The nitric oxide means this is a special spray that doesn’t just block viruses but actually kills them,” she said.

Israel will become the first country where the spray is sold. The Health Ministry has given interim approval for its sale as a medical device suitable for people age 12 and up — meaning it could be used by many who aren’t yet approved for coronavirus vaccines — with packaging stating: “Scientifically tested to kill 99.9% of viruses within 2 minutes.” 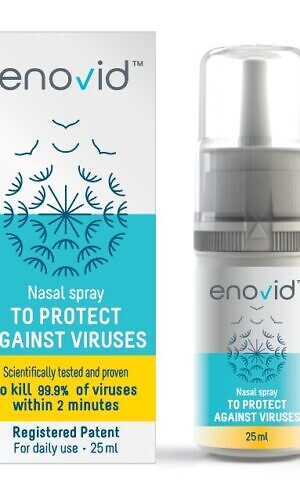 A bottle of Enovid, a new antiviral nose spray that is being produced in Israel (courtesy of SaNOtize)

It has also been approved for sale in New Zealand, and approval is being sought in other countries, including the UK.

Regev said that the factory, in Ness Ziona near Tel Aviv, is working to produce a stock of 200,000 to 500,000 bottles by May. “After this we’re hoping to get to capacity of a million bottles a month,” the Hebrew University graduate said, adding: “I hope this product will bring pride and jobs to Israel.”

The claim on the packaging is based on testing in labs, during which a range of live viruses, including influenza and SARS-CoV-2, were subjected to the spray. She acknowledged that the experiments took place outside the human body, in test tubes, and do not provide definitive proof of how effective the spray will prove in nasal passages — though she said they are very encouraging.

Separate research, which isn’t referenced on the packaging, has suggested that the spray can lessen the impact of COVID-19 among those who are infected.

Last week, SaNOtize and Ashford and St Peter’s Hospitals NHS Foundation Trust in Surrey, UK, announced results of clinical trials indicating that the spray could prevent the transmission of COVID-19, shorten its course, and reduce the severity of symptoms and damage in those already infected. The study has been submitted to a leading medical journal for review and publication. 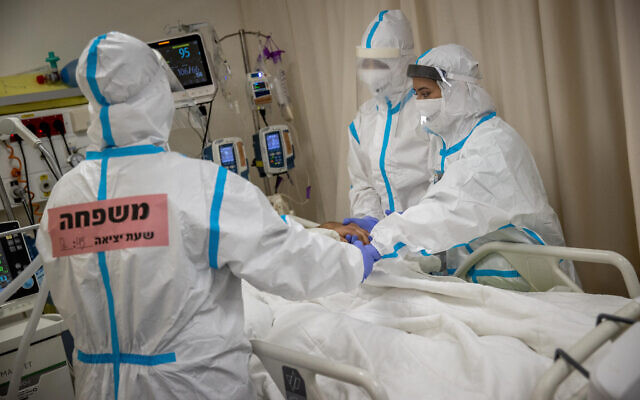 The spray was fully developed by the time the pandemic struck, as it was invented mainly to fight influenza. Its innovation is the dosing procedure for nitric oxide. “It normally comes in gas cylinders and normally gets delivered to hospitals, but we wanted a practical way to deliver it as a liquid antimicrobial and have spent the last 12 years developing this,” said Regev.

Ingredients of the spray mix together when it is administered to form nitric oxide, she said, noting: “All components are used widely in the food industry and have a very strong safety profile.” Each bottle contains a month’s supply for one person to spray twice a day for protection against viruses.

She said: “Theoretically we could have distributed it a year ago, but we needed to negotiate regulatory approval. That’s the biggest frustration, that we’ve been trying 24/7 for a year to bring it to the market, and it could have saved a lot of lives. I believe it would’ve prevented infections and therefore reduced deaths.”

This story first appeared in Times of Israel, https://www.timesofisrael.com/life-saving-nose-spray-that-kills-99-9-of-viruses-begins-production-in-israel/?utm_source=The+Daily+Edition&utm_campaign=daily-edition-2021-03-22&utm_medium=email