Clinging to an anachronistic model of animal husbandry, which is evidently injurious to [the] harmonious relationship between the herders and the farmers as well as the local populace, is wicked and arrogant.
Gov. Akeredolu to AGF Malami

Last week, the rules of logic, if not set aside, were obfuscated. Some critical federal functionaries, apparently influenced by primordial sentiments outside of good reasoning, garbled with facts. It was actually an epochal week in this year’s data book, a week of the absurd, an incongruous time when reasoning took the back seat and arguments were everything but logical. Discerning minds went off duty in the nation last week. Men of low heads were on parade and they did not disappoint their level even at funerals where ‘heartless’ messages were sent.

Then the week ended in a tragic way with the flight accident that consumed the Chief of Army Staff, Lt-Gen. Ibrahim Attahiru, and virtually all his official retinue.

Imagine a nation already inundated with insecurity issues losing its army chief in an air mishap! What other evidence do you need to confirm the rut in which we are mired as a nation? The Afrobeat legend Fela Anikulapo-Kuti would compare this with the dead getting involved in an accident (dead bodi geti accident, ye kpa!)

Insecurity as a news item with its attendant fallouts continued trending in the week with a nation already visibly shaken to the marrows recording more blood flowing with the Kaduna plane crash.

Already, deaths in our country have become like a flag hoisted in the open field, always flying. Dying and killing are fast losing news value because of their frequency.

The Inspector-General of Police, Usman Alkali Baba, started the week’s absurdity with the mindless directive to policemen and women to shoot at sight, not minding the human rights concerns of the media because he would be there to defend them.

If a police force with an unenviable record of indiscriminate killing of innocent citizens gets such brazen backing from the top, only God can save anybody standing in front of a policeman in the South East. It is true that there have been mindless and wicked attacks on police by the faceless gunmen rampaging the region, but does it merit a blanket directive amounting to a licence to kill? Moreover no such order came from any police chiefs against the herders who started all the security wahala.

I thought that wise men and even nations learn from their mistakes to avoid a repeat of history. In 2009, I was on the panel that interviewed a new IG of Police, Ogbonna Onovo, for Thisday. The interview was held in Abuja shortly after the leader and founder of the dreaded Boko Haram sect, Mohammad Yusuf, died in police custody. The Army had given him up for prosecution as Mohammad had gone to the police barracks to kill operatives and their families.

IG Onovo was asked why Yusuf did not end up on trial where he possibly would divulge why he was rebelling?

The IG smiled grimly and said, not off record, “Put yourselves in the position of those policemen. Somebody, unprovoked, comes to your barracks killing your colleagues, their wives, and children and suddenly you find the man fresh before you ….”

That answer–we didn’t need to be told–revealed the police mindset for extrajudicial killings. For 12 years since the death of Yusuf, hundreds of thousands of Nigerians, police, army,, and civilian men, women, and children have been killed, millions displaced from their homes, others raped, kidnapped and property worth billions destroyed for the sake of one crazy man killed in custody.

Since 2009, the nation has been at war, expending billions of dollars in arms and ammunition by a fight led by Yusuf’s successor Abubakar Shekau who had sworn to avenge his death. Since then Nigeria joined by Chad, Niger Republic, and Cameroon have been unable to win the war or kill Yusuf’s successor who reportedly took his life last week during a palace squabble.

If the new IG is a child of history and a good student of Onovo he would not have followed the route that brought us to this quagmire with Boko Haram where it appears we are at the mercy of our errors. To ask trigger-happy operatives to kill without looking is tantamount to pouring fuel on an inferno.

Still swimming in the despondency and melancholia of the 2009 blunder, the new IG is at the point of creating another monster in the South East. A terror group emerging from the region will be more sophisticated because they will be driven by well educated but unemployed youths who have access to more modern technology unlike Boko Haram.

The other widely unreasonable act of last week was the herders/spare parts dealers comparison by the Attorney General of the Federation and Minister of Justice, Abubakar Malami, while reacting to the southern governors’ ban of open grazing. Reactions to this have been in torrents. No need wasting space further except to say that the dumb comparison merely exposes the dangerous mindset of some of the Fulani elite. Imagine a Minister of Justice, the number one law officer of the country, operating in such a set of attitudes. For an irrationality like this, Buddha advises, “Do not learn how to react, learn how to respond.”

If the Fulani elite fight for their people the way they fight for cows for political purposes, cattle rearing would have migrated to the most modern technology.

But the truth is that they are not fighting for the people, they are fighting for themselves because they own the cows and exploit the rearers. Because they don’t want the people to go to school and get educated and leave roaming the streets and forests with animals, the elite owners of the cows pretend they are crusading for them. The truth remains that any help you are rendering to somebody that excludes education is nothing but enslavement. Malami has one of the best residential houses and guest houses in his home state of Kebbi. The so-called spare parts dealers, through their services, helped him to build the edifice and have been helping to manage them. He pays them and gets the services he wants and the governments turn on them for tax. Can Malami imagine Birnin Kebbi, the state capital, without the spare parts dealers?

But I can report without any fear of contradictions that herdsmen pay no tax to anybody in any part of the country. Instead, they destroy farms. Certainly the illogic of the Attorney General grossly devalued his rating in the eyes of the Nigerian populace.

Another bizarre thing that was recorded in the week under review was the tango between Governor Nasir El Rufai and the organised labour. Outside Borno and Yobe states, the theatre of war since 2009, Kaduna State has shed more blood than any other due to the divisive governance practices of the governor. Upon that he plans a mass sack of workers. This brought him head to head with the workers who could not rationalize his action. Meanwhile, the vehicle fleet of the governor is being upgraded to the most modern auto-technology but he could not accommodate workers earning as low as N30,000 or even less.

Perhaps, the most absurd of all political activities last week was Governor Benedict Ayade of Cross River State dumping his party, the Peoples Democratic Party, PDP, for the All Progressives Congress, APC. If the defection is shocking to you, his reason is even more intriguing. That he was dumping the party that gave him mandate twice to APC to join President Muhammad Buhari’s nationalistic administration.

Meanwhile, this Ayade’s new-found nationalist was the one who truncated and disgraced the two foremost public servants of Cross River origin, the former Chief Justice of Nigeria, CJN, Justice Walter Onnoghen and former Head of Service of the federation, Mrs. Winifred Oyo-Ita, in the name of politics. This is a government seen as the most ethnocentric in all ramifications but the professor-turned-governor sees him as his nationalist. We better look for the real reason underneath this obscure move.

The other issue that stood the week out is the eventual death of the terrorist kingpin Abubakar Shekau. He had died several times with some operatives getting promotion for ‘killing’ him yet the man always ‘resurrects’ and torments the people of Nigeria. It’s now confirmed that he has exited this space through his own action, blowing up himself.

But spinners are already on duty refusing to be boxed into a corner as they smell a rat and ostensibly noticed some foul play but no evidence to support their view for now. The only sure thing, however, is that the plane crashed, what caused it may never be known just as the previous ones that killed a civilian governor and a former Chief of Army and Defence. 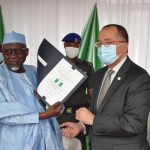 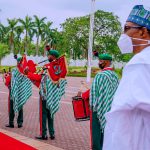 Fallacy or Fact: Buhari’s Dot in the Circle