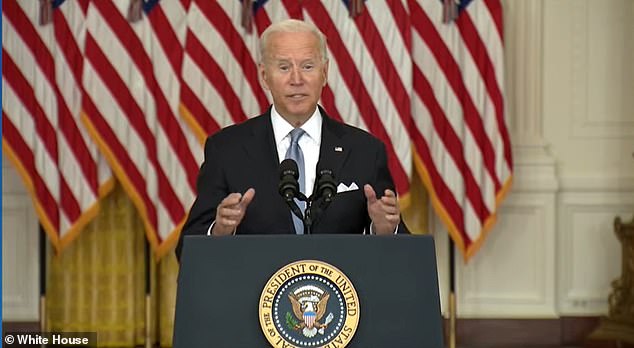 President Joe Biden on Monday laid blame for the sudden collapse of the Afghanistan government in recent days on Afghan politicians and security forces who surrendered in the face of Taliban advances, saying their lack of will justified his decisions to pull all U.S. troops out of the country.

“The truth is, this did unfold more quickly than we had anticipated,” Biden said in a national address from the White House Monday afternoon. “Afghanistan political leaders gave up and fled the country. The Afghan military collapsed.

“If anything, the developments of the past week reinforced that ending U.S. military involvement in Afghanistan now was the right decision. American troops cannot and should not be fighting in a war and dying in a war that Afghan forces are not willing to fight for themselves.”

More than 2,400 American service members have died in support of efforts in Afghanistan, while more than 21,000 were wounded.

Biden’s speech came amid increasing criticism of U.S. strategy in Afghanistan, which has all but fallen into Taliban hands again after nearly 20 years of military occupation by American forces and foreign allies.

White House officials announced the withdrawal of the remaining American forces from Afghanistan earlier this spring. The president noted that his predecessor, Donald Trump, had negotiated a withdrawal of all U.S. troops from the country by May, but that timeline was pushed back to September to ensure a safe and orderly removal of personnel.

Instead, in recent days the withdrawal effort has descended into chaos, with Taliban fighters taking over key cities and American citizens and allies frantically rushing to the main airport in Kabul in an attempt to escape the country’s collapse.

On Monday, Biden stood by that decision, even despite the result.

“There was only the cold reality of either following through on the [withdrawal] agreement or escalating the conflict and sending thousands more American troops back into combat,” he told the nation. “After 20 years. I’ve learned the hard way that there was never a good time to withdraw U.S. forces [from Afghanistan.]”

Biden deployed 6,000 troops back to the region in recent days to provide security for embassy staff and foreign nationals as they attempted to flee. On Monday, he acknowledged that the pace of those removals in recent months was slower than what was needed.

“Some of the Afghans did not want to leave earlier, still hopeful for their country,” he said. “It was also in part because the Afghan government and its supporters discouraged us from organizing a mass exodus, to avoid triggering, as they said, a crisis of confidence.”

That latter point became moot this weekend, when Afghanistan President Ashraf Ghani fled the country, effectively ending the democratic government’s control of any of Afghanistan.

Biden said he is proud of the U.S. military’s work in the country, even if the end of the mission has become a tragedy.

“We went to Afghanistan almost 20 years ago with clear goals: get those who attacked us on Sept. 11, 2001, and ensure that al Qaeda could not use Afghanistan as a base from which to attack us again.

Veterans Affairs officials warn that veterans should be wary of anxiety and stress caused by the tragedy unfolding in Afghanistan. Leo Shane III

The commander-in-chief also acknowledged that the collapse of the country was particularly difficult “for anyone who spent time on the ground working to support the Afghan people, and for those who have lost loved ones in Afghanistan.”

But, he said, that was not enough to continue a fight that likely would have cost more American lives.

“We will continue to push for regional diplomacy engagement to prevent violence and instability, and will continue to speak out for the basic rights of Afghan people, of women and girls,” he said.

“I’ve been clear, human rights must be the center of our foreign policy, not the periphery. But the way to do it is not through endless military deployments.”

Satellite imagery from commercial providers shows crowds of people gathered on the tarmac at Hamid Karzai International Airport in Afghanistan as thousands of people try to exit the country. Nathan Strout

In coming days, U.S. military personnel are expected to evacuate thousands more Americans and Afghans from the country. State Department officials said all embassy staff, including the U.S. ambassador to Afghanistan, have been successfully transported to safety.

Earlier in the day, American military officials met with Taliban leaders to warn them that interfering with the evacuation efforts could result in significant bloodshed. Biden repeated that warning in his speech.

“We’ve made it clear to the Taliban — If they attack our personnel or disrupt our operations, the U.S. response will be swift and forceful,” he said. “We will defend our people with devastating force if necessary.

“And once we have completed this mission, we will conclude our military withdrawal and America’s longest war. After 20 long years of bloodshed, what we’re seeing now is sadly proof that no amount of military force would ever deliver a stable and secure Afghanistan.” 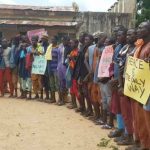 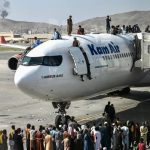