Chief Briggs, a private sector player in the oil and gas sector in Nigeria lamented that restive communities destroy oil pipelines frequently and sabotage operations of oil companies in their communities.

Mr Gbenga Adebayo, chairman of Association of Licensed Telecommunications Operators of Nigeria (ALTON) on his part said unemployed youths  are easily recruited by terrorists, bandits and other criminal elements who are  in the habit of vandalizing valuable national infrastructures.

Adebayo, whose paper was titled: “Telecommunication Infrastructure as Critical National Security and Economic Infrastructure” said the telecom industry is “one of the most important sectors of our economy and the Industry has evolved over the last 22 years” pointing out that “many of these changes were influenced by the convergence of technologies of voice, data and internet of Things (IoT) and other information services which has led to the era of the Information Society based on infrastructural capacities.”

Critical national assets, he noted, “are identified as the basic facilities, services and installations critical to the security, social and economic well-being of any State. They represent utility assets or ‘public works’ which are indivisible from the efficient operational activities of any society.

“It is universally accepted that any nation’s health, wealth and security depend upon the production and distribution of certain goods and services. The array of physical assets, functions and systems across which these goods and services move are considered critical infrastructures.

The ALTON Chairman went further to say that “It has been noted that in view of the pivotal role played by these assets in assuring the seamless operation of any society, the current global trend is for governments to put in place aggressive programs or agencies to oversee the protection of such Critical National Infrastructure (CNI).

“These protection strategies are aimed at according CNI physical and virtual protection from both man-made, physical events and acts of nature that could disrupt their provision, he added.

Mr Adebayo stated that communications infrastructure as critical national assets warrant the highest levels of protection in view of their significance and importance attached to communications, emphasizing that this “is appropriate in view of its particular supportive role in relation to other critical infrastructures, social and economic activities.”

He enumerated problems militating against the smooth operations of the telecoms sector to include “Non availability of other interdependence CI Network  especially Energy, Vandalism; Lack of Cooperation, Respect and harmony among regulatory agencies causing Multiple regulation

Others include Promulgation of sectorial laws targeted only at Telecoms operators and effected only by site shut down; Disrespect for rule of Law by various arm of Government and Over 35 taxes and levies paid by operators thereby limiting Investment.

He expressed appreciation for government efforts in the sector adding that “ALTON and its member will appreciate the declaration of telecoms infrastructure as CNI in order to deliver qualitative communications services in Nigeria.”

The summit continues on Tuesday at the Transcorp Hotel, Abuja which is the venue of the programme. 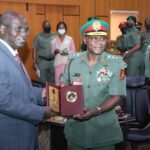