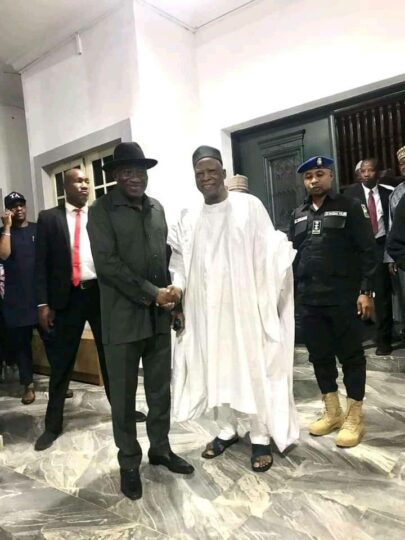 The plot to enthrone former President Goodluck Jonathan as flag bearer of the All Progressive Congress (APC) thickened Monday as he was photographed visiting the chairman of the party, Alhaji Abdullahi Adamu.

Photographs of the visit which emerged online on Monday night shows that Jonathan reportedly visited Adamu in his residence and the two politicians were photographed beaming with smiles to the camera.

The visit comes just a few hours after the Miyetti Allah Cattle Rearers, a Fulani group, bought his nomination and expression of interest forms at N100 million.

But despite the purchase of the forms and the visit, Jonathan’s office issued a statement denying that the former President has joined the APC or planning to run for the highest office again.

According to the statement signed by Jonathan’s Media Adviser, Ikechukwu Eze, “The Attention of the Office of former President Goodluck Jonathan, has been drawn to the purported purchase of the Presidential Nomination and Expression of Interest form, of the All Progressives Congress APC, in his name, by a group named “FULANI GROUP “

“We wish to inform the General Public, particularly Nigerians, that Dr. Goodluck Jonathan has no knowledge whatsoever of the personalities behind the purported purchase of the form, in his name, not have any relationship with the association.

“It should be noted, that as at the moment, Dr Goodluck Jonathan is not a member of the APC and therefore could not have accepted such gesture, from those behind the move.

“While we appreciate the overwhelming request by cross-section of Nigerians, for Dr Jonathan to make himself available for the 2023 Presidential election, we wish to state, that he has not in anyway, committed himself to this request, even though some of them, considered patriotic.

“The general public is hereby urged, to disregard the action of the group, as it has no consent nor approval from Dr Goodluck Jonathan.” 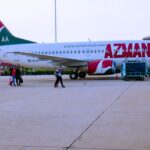 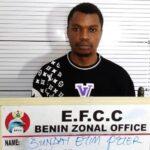