A group of abortion rights activists crashed the prominent Houston Pastor Joel Osteen’s service on Sunday, stripping down to their underwear and chanting, “It’s my body, my choice!”

The protest, captured on social media, broke out after Osteen started to lead his congregation in a service. As the rest of the congregation sat down, an activist stood up and pulled off her dress, revealing white underwear with green handprints on the bra.

“It’s my body, my fucking choice!” the activist shouted. Another activist stood up next to her, peeled off her clothes, and shouted, “Overturn Roe, hell no!”

The activists, along with a third protester, were quickly escorted out of the service as the megachurch’s congregation cheered.

The activists’ cries were obviously in reaction to the Supreme Court, which is now poised to overturn Roe v. Wade, the 1973 ruling that legalized abortion nationwide.

Without Roe, roughly half of the United States is expected to ban abortion, including Texas. Last year, Texas enacted a law that banned abortion as early as six weeks into pregnancy, effectively vaporizing abortion access in the state and forcing would-be patients to escape to nearby states for the procedure.

The Supreme Court is expected to rule on Roe’s future sometime this month, when it releases its decision in the case Dobbs v. Jackson Women’s Health, a case that considers the constitutionality of a Mississippi 15-week abortion ban.

Rise Up 4 Abortion Rights’ website lists several recent actions by associated activists. The group recently unfurled a banner at a Los Angeles Dodgers’ game that read, “Overturn Roe? Hell No!” while another supporter chained himself to the fence outside the Supreme Court and yelled the same chant.

Osteen’s megachurch draws roughly 45,000 people per week. His national profile surged sharply during Hurricane Harvey, when it was falsely reported that Osteen’s church refused to take in Texans fleeing the rising floodwaters. 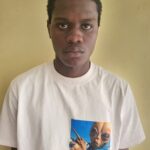 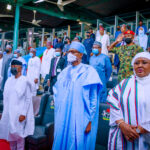