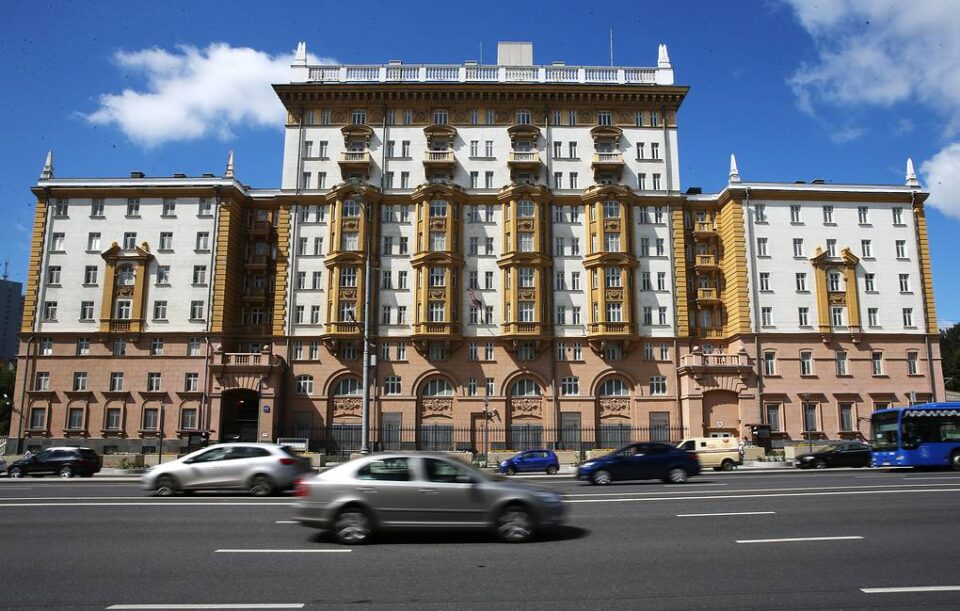 Russian President Vladimir Putin has taunted the US but changing the address of the American embassy in Moscow to name it after the pro-Kremlin separatists in Ukraine.

Authorities in Moscow said on Wednesday that they had changed the official address of the US embassy in the Russian capital after naming a previously unnamed open area in front of the building’s main entrance.

It said the embassy is now located at 1 Donetsk People’s Republic Square, referring to a breakaway region in eastern Ukraine that Moscow recognised as independent shortly before sending troops there.

The statement added that the change was made after Moscow councillors proposed honouring the ‘defenders of Donbas’ – a majority Russian-speaking region in Ukraine that Russia says it is liberating as part of its military campaign – on the map of Moscow.

In February 2018, a street outside the Russian embassy in Washington (pictured) was named after Boris Nemtsov, an opposition politician who was shot dead outside the Kremlin in 2015

The new address was chosen in a public vote in which nearly 280,000 people participated, the city hall said.

In February 2018, a street outside the Russian embassy in Washington was named after Boris Nemtsov, an opposition politician who was shot dead outside the Kremlin in 2015.

Days before the invasion, Vladimir Putin signed a decree recognizing the independence of pro-separatist regions of Ukraine, Donetsk and Luhansk.

Ukrainian forces have since 2014 been fighting pro-Russia rebels in the region in a conflict that has killed some 14,000 people.

Areas of Donetsk and neighbouring Luhansk which were occupied by pro-Russian rebels before the start of the war – so-called ‘People’s Republics’ – announced a general mobilisation in late February, just before the war broke it.

All men under the age of 55 were banned from leaving the territory, and put on notice that they might be called up to join the fighting.

Since then, Denis Pushilin – leader of the Donetsk People’s Republic – has been forced to raise the age to 65, because so few men have been found to join the army.

Those in the occupied areas – many of whom consider Ukraine to be their home country – have described thousands of men going into hiding to avoid the draft.

Fighting-age men are said to be hiding in the basements and back-rooms of houses where no males are registered, since the draft is organised by address.

All those who did not avoid the conscription have been sent away to the frontlines, often poorly armed and with ageing Soviet equipment – some of it dating back to the Second World War.

DPR units have been photographed fighting in Mariupol, across the Donbas, and in the southern Kherson region.

Russian forces have taken heavy losses during the war, which is now over three months old, and DPR forces have been no exception.

In an update late last month, the government gave total casualties as 1,912 soldiers killed and 7,919 wounded since the start of the war.

Ukraine is losing up to 600 troops per day including 100 killed in action, President Zelensky has admitted as he gave the clearest indication yet of the blood-debt his military is paying to hold back the Russian invasion.

Zelensky said the situation in Donbas, where the fiercest fighting is taking place, is ‘very difficult’ but insisted his soldiers are ‘holding our defensive perimeter’ despite advances by Putin’s men in recent days.

‘We’re losing 60-100 soldiers per day as killed in action and something around 500 people as wounded in action,’ he said – lifting the lid on Ukrainian casualties which have been a closely guarded secret throughout the war.

The battle for Donbas has now largely descended into brutal trench warfare, with Ukraine digging defences that are pounded by Russian artillery before troops try to rush through gaps in the line – not unlike the battlefields of the First World War.

Out-gunned by the Russian side, Ukraine has been begging allies for better artillery to strike back at Putin’s men – with Joe Biden revealing on Tuesday that America will be sending advanced rocket systems to aid in the fight.

The heaviest fighting is currently ongoing in the city of Severodonetsk, which is now largely under Russia control. Capturing it entirely would put Putin’s forces on the cusp of taking Luhansk province – one of his key war aims.

Ukrainian forces in the region are taking heavy losses. Neil Hauer, a journalist who has spent time on the frontlines, revealed one soldier he is in contact with saw 56 men in his 60-man squad killed in a recent rotation to the front.

But the fighting is taking a huge toll on Russian forces as well.

Though their tactics have improved since the botched effort to take Kyiv, Putin’s generals are facing Ukrainians who are better armed and prepared than they were in the opening weeks of the war.

Western officials briefing journalists on Wednesday estimated that Russian forces have been ground down to around half the strength they had before the war started. 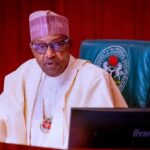 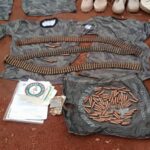