Over 70 suspected Boko Haram/Islamic State in West Africa Province (ISWAP) terrorists have drowned in a river after coming under heavy Nigerian Air Force (NAF) aircraft bombardment after they tried to flee from a crushing encounter with Nigerian Army troops.

Sources said that after the Sheruri attack, the escapees drowned in a river around Dipchari village of Bama LGA on Friday as they tried to flee and were eliminated by a NAF fighter jet dispatched to stop their escape.

“The insurgents suffered heavy blows; they have lost more than 70 fighters around Dipchari village. Many are unaccounted for as we speak,” the security source said.

Another source familiar with the development told our correspondent on anonymity that following the incident, the insurgents were seen recovering scores of their dead bodies in the river.

“This morning around 8:30 am, they conducted a funeral for more than 50 of their fighters at Dipchari village and they continue with the search for the remaining terrorists.

“They recovered many dead bodies from the river but dozens of the fighters are still missing,” the source said.

There was no official statement from the military high command before filing this report but many locals in the area confirmed the development.

The military had recorded many successes recently in many parts of the country. 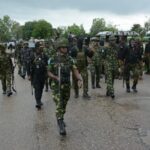