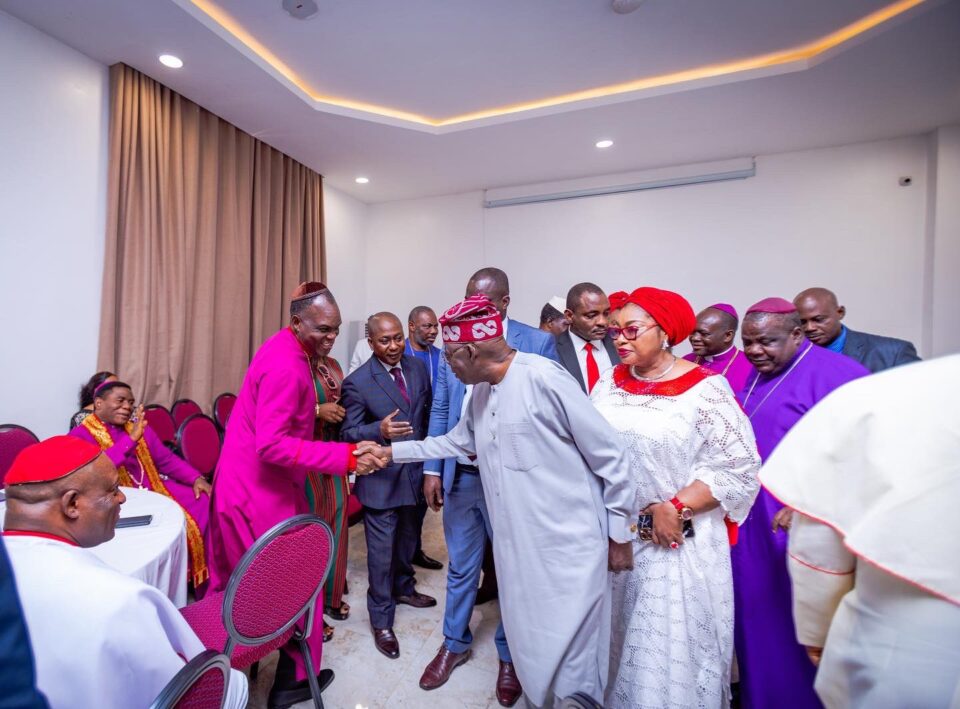 As controversy continues to trail the recent meeting of the Presidential candidate of the ruling All Progressives Congress (APC) Bola Ahmed Tinubu with members of the Pentecostal Fellowship of Nigeria (PFN) Northern region, one of the attendees of the meeting who is the Senior Pastor of Shekinah Global Ministries, Jos, Plateau State, Reverend Danjuma Banyang, has expressed regret for attending the meeting just as he agreed that indeed, the Presidential candidate gave them undisclosed sum after the meeting.

A source closed to some of those who attended the meeting revealed that all the attendees were given a parting gift in monetary terms which amount was not disclosed according to a story which circulated but was disbursed depending on ranking.

One of the clerics who attended the meeting has now publicly admitted to receiving monetary gift from Tinubu but did not reveal how much he was given but said that the money was tagged as “transport money.”

When contacted by our Correspondent for reaction to the story, Reverend Danjuma Byang replied: “At the end, breakfast was served, with some campaign souvenirs, like towels, tea mugs, notebooks and some transport money to all attendants.”

According to Byang: “Hello, Thanks for your deep concern about the smear campaign going on in the social media to tarnish my hard-earned integrity as a Minister of the Gospel for over 40 years. Yes I reported to my Church and the ‘Blunt Truth Forum’ , which I created years ago about the meeting and the role I played. I was invited both as a Pastor and as a veteran Journalist. Those who know me, know what I mean. I was one of the 3 attendants prepared to make comments and ask questions which I did! And this is what I said:

“Many Christians, especially from the North have been alarmed that Northern Christians were seen in a meeting with Bola Ahmed Tinubu (BAT), the APC Presidential candidate in the 2023 general elections, as reported in some media outfits. It is true that the Northern Pentecostal Bishops, under the leadership of Archbishop John Praise Daniel, who is the National Vice President of the Pentecostal Fellowship of Nigeria (PFN), and the chairman of Northern Pentecostal Bishops, called for the meeting in Abuja.  The meeting was enlarged to include all Pentecostal Archbishops, Bishops and Apostles from the North, with about 100 people in attendance.

“Bishop Jonas Katung, one of the organizers of the meeting invited me to be there.  He explained that the Church in Nigeria most times plays the politics of exclusion, often with grievous consequences, when the outcomes manifest. He said there is nothing wrong in interfacing with all political aspirants and candidates, even with the ones we don’t share in their manifestoes or those we think are not likely to win, to hear what they have to offer and to have the opportunity to express our fears and challenges if they eventually win the elections.

“This made much sense to me and I decided to attend the meeting.  And I thank God I did!” Bola Ahmed Tinubu personally came to the meeting without much funfair. For almost an hour he took time to try and convince us that in all his political, public and private life he had never been a religious bigot who discriminated against Christians, and gave several examples to buttress this.

“He explained also that he didn’t choose Senator Shettima Kashim as his deputy to spite or despise Christians in the North, but only as a political strategy to win the election.  He therefore pleaded that conscious efforts must be made by all concerned to try and play down the role of religion in politics and governance in Nigeria. After the speech I was one of the 3 attendants who were permitted to respond by way of comments and questions.

“I appreciated the points he had made but made him realize that the situation in the North was quite different from what obtained in the South. I told him that Christians in the North were not happy with his choice of another Muslim from the North to deputize for him for good reasons. I explained that in the North there is a deliberate agenda to marginalize Christians from the public square and to annihilate Christianity in due course, if possible. I said there are at least 8 states with majority Christian population, and few others more which are roughly equal in population between the two faiths.”

He continued that, “But these are our experiences: In this government, there are more than 30 ministers in the Federal Executive council from the North and Abuja, but we have only 2 Christians among them. Christians find it hard to acquire land documents to build churches or even to renew the ones that have expired. Christians are not allowed to preach their faith on government owned media houses in some states.The teaching of Christian Religious Studies (CRS) and/or Bible Knowledge (BK) have been banned in public schools in many states, including Borno state, in which the ban was done by the man he had chosen to deputize for him.

“Christian students are denied admission into public universities and other tertiary institutions, and the few admitted are denied their choice of some professional courses, like medicine, engineering, law, accounting, etc, which are needed for Nigeria’s development. The targeted killings and displacement and occupation of the lands and communities belonging to Christians in the North, etc.”

“I had to stop because of time constraints. I then asked him that if by any means we supported him and he wins the election how would he redress these challenges? The applause I got after my question showed that I spoke the mind of almost everybody in the hall. The two other speakers also raised issues about what he had for us as Christians in the North if he won.”

According to him, “In his reply, he (Tinubu) appreciated the issues we raised.  Obviously some of them were eye openers to him. But he said for political exigencies he wouldn’t divulge what he planned to do in response to the issues raised, but that he had heard them and would surely act on them, if elected.  He said all he wanted the Christian community from the North to do was to identity capable men and women with integrity to present to him for engagement in his government if he became President.

“In closing, the convener of the meeting thanked BAT for coming and the comments he had made and told him to consult widely among Christian leaders in the North, who are still grieving for what they perceived as rejection and despising Christians in the North, among whom he did not find anyone capable to deputize for him.   He also asked him to ensure he recovered occupied Christian lands and communities violently taken over and occupied by terrorists, if he became President in 2023.”

Danjuma Byang then said that at the end, breakfast was served with some campaign souvenirs, like towels, tea mugs, notebooks and some transport money to all attendants.”

He however stressed: “It must be emphasized that Archbishop John Praise Daniel and Bishop Jonas Katung, the, Convener of the meeting, made sure that BAT did not leave the meeting thinking that the Northern Pentecostal Bishops had endorsed his candidacy for the office he was looking for, but wished him the best of luck. I am not saying that Tinubu did not give money to John Praise or how much it was. I also don’t know how much was given to the Bishops but what I got was truly just transport money which hardly brought me back to Jos and to fix my car that was damaged due to bad roads.”

However, following reactions, Reverend Byang tendered an apology in another piece he posted saying that it was an error of judgment on his part to have participated in the meeting and to have even collected Tinubu’s money.

Titled “Error of Judgment,” it reads thus: “As soon as I reported the meeting here, there was an outcry about it! Many called me personally to voice their concern and how this would be interpreted by the larger Body of Christ and Nigerians in general! I appreciate your love and maturity. For the many reasons advanced here and by those who reached out to me, it has occurred to me that this was an error of judgement on my part to have accepted to attend the meeting, and also on the part of the organizers!

“But I wish to correct some wrong impressions! The meeting did not take place at BAT’s campaign office but in a hotel. Also, it was not the group that invited BAT! He got in touch with Archbishop Praise John Daniel, the National Vice President of PFN, and therefore, the most senior PFN official in the North! Bishop Jonas Katung is also a National Advisory Council member of the PFN. They are well known and respected Christian leaders across this country and perhaps beyond! But given the reasons expressed here, they should have anticipated the backlash that would follow the meeting and rejected it!

“Brothers and sisters in Christ, this meeting was well intentioned but was obviously held in error of judgement, not anticipating the reactions that would follow! Some people have ascribed base motives for  holding the meeting, knowing some of us involved, this is hardly charitable!

“But what has happened has given me and am (sic) sure the conveners some lessons learnt the hard way! I can promise you that none of such will happen again, and if it does I won’t be part of it. Can we then bury the hatchets now, please? At least on this platform! Thank you!”

He concluded that, “We know those behind this smear campaign! And we know their motives. When it gets to it we shall do the needful! Thanks”

It will be recalled that barely two days after the clerics met with Tinubu, the Pentecostal Fellowship of Nigeria (PFN)  disowned the ‘Pentecostal Bishops’ Forum of Northern Nigeria.

The Deputy National Secretary of PFN, Bishop David Bakare, said that such group does not exist within the PFN, saying, “there is nothing in PFN that is regional based like Southern or Northern Pentecostal Bishops”.

“The PFN was not part of the meeting with the presidential candidate that was highly politicised. We are, however, aware of the ripples in the public domain about this matter. I am speaking officially to clarify that PFN has nothing to do with that,” he stated.

Continuing, Bakare said: “The PFN is an arm of the Christian Association of Nigeria (CAN) and the position of the fellowship on the same faith presidential ticket of the APC has not changed. I am speaking to you officially and authoritatively that the ranks of the Christian community and of course, the PFN, which I represent, is not broken at all.

David Bakare stressed that, “The Pentecostal Bishops’ Forum of Northern Nigeria is not known to the PFN. The forum does not have any affiliation or relationship with the PFN that is registered with the government of this nation. The position of the PFN on same faith ticket still stands as it was in the beginning and we have not, for any reason, shifted our position on that matter.” 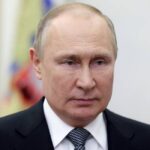 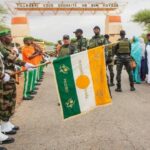