THE Peoples Democratic Party (PDP) has promised to establish an agency to be named “Jigawa Roads and Security Agency (JIROSA)” to rehabilitate and reconstruct all the damaged bridges, culverts and roads destroyed by the recent flood disaster in the State.

Saying that he is disturbed with the present transit and transportation suffering and difficulties as a result of poor and bad roads, Alhaji Mustapha Sule Lamido explained that his government will do everything humanly possible to restore brotherhood among the citizens, adding that “no meaningful development can be achieved without peaceful co-existence among the people.”

Earlier in his address, Alhaji Abba Anas Adamu, Director of Documentation, had called on the Governorship candidate to implement the law established under the last PDP regime to deal with this menace of herdsmen, farmers misunderstanding.

In his address, the State PDP chairman, Alh. Ali Idris Diginsa assured that, the party will bring to an end the Fulani, herdsmen as well as all other vices to enable Jigawa catch up with it’s sister States. 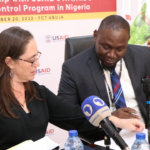 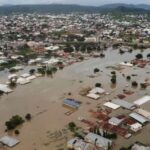