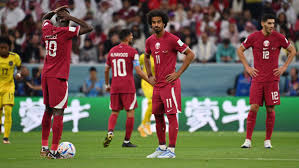 Qatar’s first-ever World Cup match ended in dismay for an over-matched team and with a place in unwanted football history.

The global football fiesta opened with the hosts outplayed and embarrassed in a 2-0 defeat to Ecuador in front of 67,372 fans at Al Bayt Stadium.

In 92 years of football’s biggest event, a host team had never lost their opening game.

The first World Cup in the Middle East is a chance for Qatar, a tiny Arab country jutting out into the Persian Gulf, to showcase itself to the wider world.

Its football team, playing at this level for the first time by virtue of hosting the tournament, couldn’t live up to the moment as Ecuador captain Enner Valencia scored both goals in the first half.

For many, that would jar with this World Cup being hosted by an emirate where homosexual acts are illegal, one that has come under strong criticism for how migrant workers have been treated building stadiums and tournament infrastructure since Qatar won the scandal-shrouded vote in 2010.

The years-long scrutiny was never going to stop just because the football had begun, but a win for the host nation would have at least put a favourable light on Qatar, football-wise.

Instead, Qatar’s players, fresh from spending seven months together in a pre-tournament training camp under Spanish coach Felix Sanchez, froze in front of an expectant crowd and a disciplined Ecuador team that might just pose a danger to more high-profile opponents over the next few weeks.

Valencia thought he had scored in the third minute when he headed in from close range following an acrobatic cross from Felix Torres. After a video review of about two minutes, Ecuadorian celebrations were cut short when the goal was ruled out for what appeared to be a marginal offside.

Ecuador did take the lead, however, in the 16th minute when Valencia was tripped by Saad Alsheeb after rounding the goalkeeper, who was booked for the challenge. Valencia was nonchalant as he trotted up and converted the spot kick into the bottom corner.

The 33-year-old striker added his second in the 33rd by heading in a right-wing cross from Angelo Preciado.

With Qatar’s passes often going astray and its defensive raggedness repeatedly exposed, Ecuador had no problem holding onto its lead as Sanchez stood helpless in his technical area and the home fans fell quiet.

There were lots of empty seats for the second half which was almost a damage-limitation exercise for Qatar.

Qatar’s Bedouin roots, embodied in a tent-shaped stadium, were on display as the country’s emir opened the World Cup at a ceremony during which he kissed his father’s hand and welcomed the world to football’s biggest event.

“From Qatar, from the Arab world, I welcome everyone to the World Cup 2022,” Sheikh Tamim bin Hamad Al Thani said.

“How lovely it is that people can put aside what divides them to celebrate their diversity and what brings them together.”

Then, fireworks exploded from the roof of Al Bayt stadium, 44 km north of the capital, Doha.

Sheikh Tamim waved to the crowd and leaned down to kiss the hand of his father, former ruler Sheikh Hamad bin Khalifa Al Thani, who abdicated in 2013, making way for his son.

Then the lights dimmed and three camels, dancers and a Qatari singer called “Dana”, who wore a traditional batola, a leather face-covering worn by some women in the Gulf region, filed onto the pitch.

US actor Morgan Freeman followed alongside Ghanim Al Muftah, a 20-year old Qatari man who was born with a rare condition that impairs the development of the lower spine.

Mr Freeman sat on the pitch beside Al Muftah.

“How can so many countries, languages and cultures come together if only one way is accepted?” Mr Freeman told the crowd.

“When you call here, we welcome you into our home,” Mr Al Muftah said, referencing the “bayt al sha’ar” or tent that nomadic bedouins of the Arabian peninsula once used for shelter, which inspired the stadium design.

The ceremony featured video footage of Sheikh Tamim as a boy playing football in the desert, which seemed aimed at countering the argument made by Qatar’s critics that the Gulf Arab state has no football tradition.

There were no major Western leaders in attendance, as Qatar is under intense scrutiny for its human rights record.

Among those who did attend was United Nations Secretary-General Antonio Guterres.

The stage-managed calm inside the stadium contrasted with reports of chaos at the fan festival at Al Bidda Park in Doha. 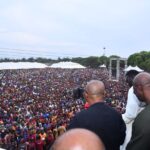 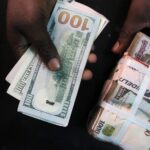