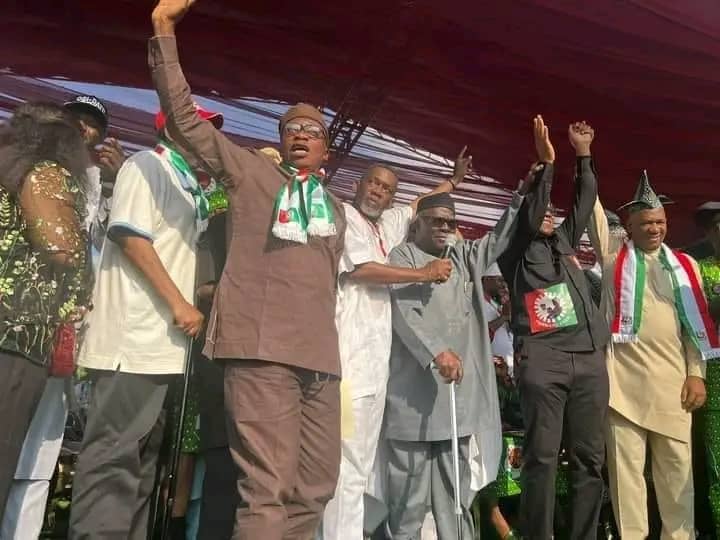 The Labour Party Presidential candidate, Mr. Peter Obi, on Wednesday brushed aside the initial hitch of grounding his campaign airplane and arrived the ancient city of Ibadan, declaring that doubting Thomases who still don’t believe that taking back Nigeria is possible are in for a rude shock.

Announcing his arrival into the historic city of Ibadan via a tweet, Obi said: “The non- believers will come to believe. We are taking back Naija.”

At the rally, a mammoth crowd at the Adamasimgba Stadium, Ibadan, Obi paid glowing tributes to past heroes of Yorubaland who made great contributions to the growth of this country and mentioned in particular the iconic leaders, Chiefs Obafemi Awolowo and Akintola.

On the current leader, Obi eulogized the leader of pan Yoruba nationality 94 year old Pa Ayo Adebanjo who was physically present at the rally ground to identify with the candidate whom they had earlier endorsed.

Obi told the organic crowd that the positive results of what Pa Adebanjo and Afenifere are doing will show in future when Nigerians take back their country.

He said that Pa Adebanjo and Afenifere are fighting for justice and equity, noting that it’s the only way to take our country back.

“The foundation of future Nigeria will be laid on justice and equity which is what Pa Adebanjo and Afenifere are fighting for.”

He assured the jubilant crowd who were shouted Obi endlessly that when, "we take back Nigeria from consumption to production, the great city of Ibadan will be restored again"

Obi also reiterated that when Nigeria returns to production instead consumption, there will be jobs and Ibadan will be great again as he and his Vice are great wealth creators.

The LP candidate also assured that under his watch and Datti, Nigeria will be secured because jobs will be created and people will be pulled out of poverty. "When you pull people out of poverty, you reduce crimes and criminality", he said.

Obi noted that their dream which is realizable is to make Nigerians to be proud of their country so that instead of brain drain, those outside will come back home and everybody will be proud to be a Nigerian.

The LP flag bearer finally thrilled the lively audience with the question whether they will allow a driver who knocked a vehicle to continue driving after fixing the car, to which they shouted 'No' in unison.

The Labour Party National chairman, Bar Julius Abure told the crowd to resist the lure of money and vote their conscience to save Nigeria and make it better for all citizens. “Don’t sell your vote, reject their money and save this country by voting Labour Party’s Obi and Datti.